Today I'm excited to officially announce the 1.0.0 release of the Azure Tools for Visual Studio Code extension. This post will summarize the features available in the extension, provide you with links to demonstration videos so you can learn more, and let you know how you can install the extension and get going with it. In seconds you'll be managing your Azure resources and deploying new topologies on a Mac, PC, or Linux development workstation.

Bring Azure Development to Every Platform

So I started working on the product and within a few hours was installing a very early prototype on my wife's Apple laptop as she stood behind me with a concerned look on her face wondering why I was typing in a command line and enjoying it.

After a few days I'd made some decisions about the extension in order to come up with a tangible list of feature ideas I'd tackle for my initial release:

Realistically, I didn't have a lot of time to dedicate to the development so I recruited help, too. My good friends and colleagues Ian Philpot from Atlanta and Anze Vodovnik from Slovenia (who's now in the UK), offered some ideas and coding assistance on a few features in the extension. We also ran some of our ideas by Stuart Leeks, who naturally had some great feedback. During the 1.1.0 release, Christos Matskas got involved and contributed a great list of features like Key Vault and Batch account creation functionality.

All of the folks working on the extension did so in their spare time. We worked for a few hours here and there in the evenings and put this together skunkworks-style. The ATVSC is free-form, open-source, and unsupported aside from the growing community of folks interested in it.

It was great to see an organic interest in my colleagues and from the Visual Studio Code team, namely Chris Dias and Wade Anderson who supported us and gave some ideas. What's interesting is that the time I'd thought I'd need to get things done was far loftier than reality - the Visual Studio Code extension framework and Azure Node SDK are both pretty easy to use, if not elegant in places.

We came up with a great list of features for the 1.0.0 release, which are also listed on the Azure Tools for Visual Studio Code marketplace page. 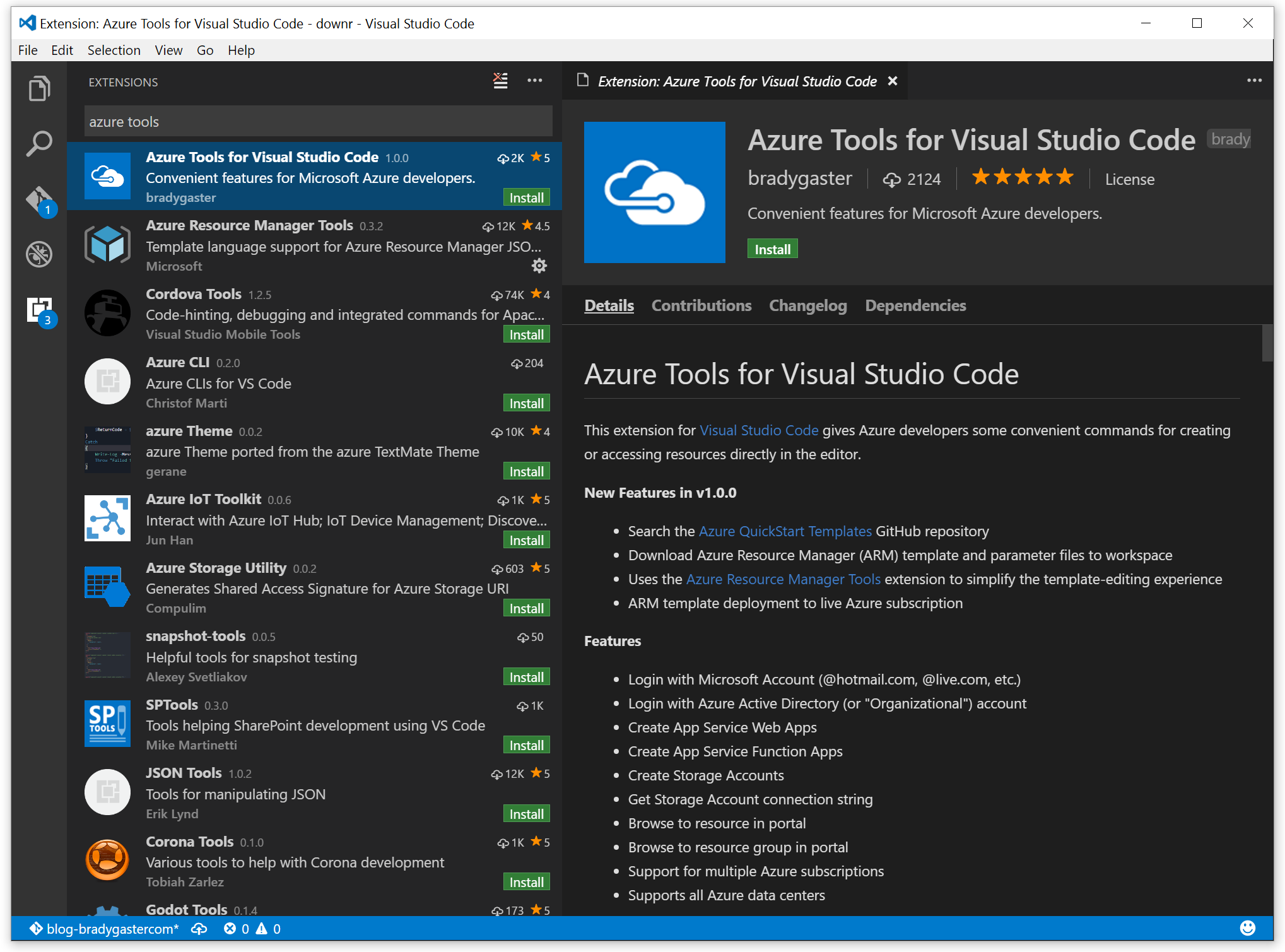 Once the extension installs you'll need to restart Code. Then you can login and get started. The login command supports Microsoft Account and Organizational Account login, so you have a pair of authentication options.

Note: If you want to login with a @outlook.com, @live.com, or @hotmail.com account - a.k.a. a "Microsoft Account," you'll need to set the azure.tenantId setting using the File -> Preference -> User or Workspace settings gesture within Visual Studio Code. The screen shot below demonstrates this.

At this point we're sure the Azure Tools for Visual Studio code offers a great tool for developer who are already using the Azure portal for managing their resources and the command line tools for provisioning or configuring things during the development or devops lifecycle. Our goal was to enable developers for whom Visual Studio isn't an option with Azure development tools and with provisioning and template capabilities, and this first release delivers that goal.

The extension is available as an open-source project and can be found in the GitHub repository https://github.com/bradygaster/azure-tools-vscode. If you experience any issues or have suggestions or feature requests, use the GitHub repository's Issues page. Of course, contributions are welcome too, and all pull requests will be reviewed carefully.

Take a moment and give the extension a spin. We're interested in what you think, how to take it to the next level, and what sort of features you'd like to see next. Happy coding!