Posts in the 'Microcontrollers' category

The posts below all relate to the topic you selected.

posted 6 years ago in Microcontrollers

A few months back I was out with my sons at the Bellevue Mall. They were shopping for Lego, which is ironic considering my discovery that morning. As we passed the Marbles the Brain Store around the corner from the Lego store, I noticed the littleBits Synth Kit sitting on the shelf. See, littleBits are like the Lego of microcontrollers, and they'd just introduced the Synth Kit, which gives you the ability to create any range or combination of modular synthesizer built out of the very same "bits" - the Lego of microcontrollers - that littleBits had already rolled into their maker-inspired product line.

As the video below demonstrates, littleBits makes it child's play to create a synthesizer and to play your own original music on it. Gabriel puts together an itty-bitty little synth keyboard in moments on our kitchen countertop, and smiles with satisfaction as he tinkers away.

For Christmas, my brother-in-law picked up a cloudBit™ module for me, so I've been able to play with more of the littleBits modules unrelated to music. These devices are more appropriate for makers, for folks who are fans of LEDs and BLE, but targeted at folks who don't want to go deep with soldering or programming. At the same time, littleBits aren't toys; they've got servo and motor modules, light modules, dimmers, relays, a logic control sensors. In the project case below you'll see a few different things from littleBits:

I also made use of a project box I picked up from Radio Shack and previously drilled holes through, apparently. Which came in handy for this project. 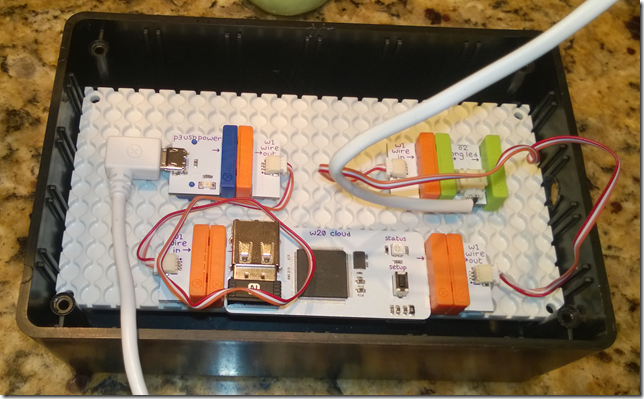 My favorite part is that littleBits also gives opportunities to up-and-coming shops who decide to build awesome new bits the community can use. There's a bitLab section on the littleBits web site you can go to vote for and commit to buying new bits when they're released. The community littleBits has been able to build is enthusiastic, motivated, and young-at-heart. Most importantly, they're contributing back to littleBits and improving the product. It's awesome to see, as it is awesome to see some of the great press littleBits has received in the media and at CES recently.

Once I got my mounting board loaded with bits I plugged it into the USB power supply and put the top back on the box, being careful to pull the long LED through one of the pre-drilled holes and the USB power through another. Then, I stuck the long LED into the ceramic skull I recently made with Gabe at Paint Away, and made the notification light a little more interesting-looking (especially when the red power LED lights up in the inside of the skull).

So then I turned on a camera and my screen-recording software and took a video of GitBit working with the skull. You could come up with something else, but once you wire up your cloudBit™ you're ready. If you have a GitHub repository you can administer, you're ready to send messages to your littleBit circuit or invention.

Would you use something like this? I've seen a lot of cloudBit™ users popping up over the holidays, so I'm assuming at least a few of those net cloudBit™ owners are using .NET, so I'd be curious to see if anyone's tried the client library. If you do, let me know in GitHub what you think, and let's support littleBits growing community in the .NET development space.

If you anyone who has a cloudBit™ and uses GitHub, we'd be interested in their review of this idea and the setup process, so give GitBit a shot. We came up with this idea and are just putting it out there for cloudBit™ owners who code to try out. The GitBit website's UI is below. It's pretty simple, doesn't do much, but what it does well gives folks an endless set of ideas they can implement.

These are some of my first tinkerings into the world of littleBits, and I'm really enjoying it. I'd have to say that with the increased simplicity and time to first result, littleBits is the best microcontroller prototyping idea I've seen in years. I've submitted a project to their community using the Azure Scheduler with their REST API so look for that, but keep checking this space as well. I'm going to write a few more posts on littleBits and Azure together, as I see a lot of ideas and potential use cases. Most fun, some complex, and of course, some that are just darned silly.

posted 9 years ago in Kinect Microcontrollers

Update: I've uploaded the code I wrote for this demonstration project to GitHub into my KinectControlledNetduino public repository. I also forgot to mention that the Kinect code makes use of the excellent gesturing engine created by David Catuhe, which you can read about on his blog or download from CodePlex .

I'll put the code up here tomorrow once time and energy permit, but for the time being the title says it all. There's a Kinect, it controls a WPF app, that app sends messages to an HTTP server running on a Netduino, which is connected to a servo.

Using hand gestures like "SwipeRight" or "SwipeLeft," a user can literally wave to the Kinect to tell it how to tell the Netduino server how to angle the servo. Pretty neat, and quite easier than I'd expected. I'll post the code ASAP but for now here's a video demonstrating how it works.